NASPA is committed to bettering the well-being of pharmacists, pharmacy technicians, and student pharmacists. In collaborating with other national pharmacy associations, schools of pharmacy, professional organizations, and more, NASPA is working to address this issue.

Your voice is critical to enhance and safeguard the pharmacy workplace. Pharmacists and pharmacy personnel are invited to submit your pharmacy workplace experiences – positive and negative – to Pharmacy Workplace and Well-being Reporting (PWWR). Your individual reports are confidential and anonymous. 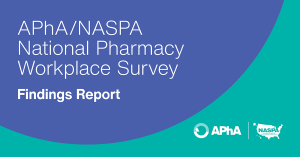 NASPA and American Pharmacists Association (APhA) have released the final report of findings from the 2021 National Workplace Survey. Results indicate that patient and consumer demands, harassment, threats, and insufficient staffing are major stressors they face.

NASPA and the American Pharmacists Association (APhA) are pleased to release the Pharmacist’s Fundamental Responsibilities and Rights focused on pharmacist’s responsibilities and workplace expectations needed to fulfil those responsibilities. These principles were established as a guide for pharmacists, pharmacy personnel, employers, patients, health professionals, and those that govern pharmacy practice and healthcare delivery and to facilitate meaningful discussions.

APhA has also compiled a great list of resources available for pharmacists, including the Well-Being Index, and burnout resources.